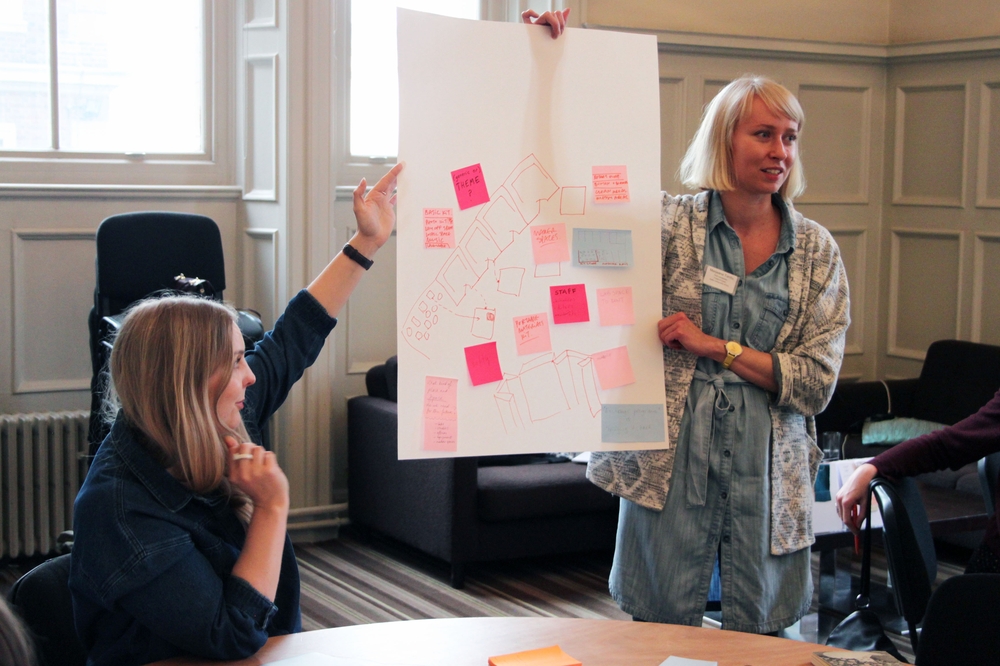 Materials research has developed rapidly in recent years, in both the scientific field and through design exploration. Design-science collaborations are emerging which create new directions and conversations in materials development. Outlooks and mindsets are changing through these collaborations to challenge traditional approaches and established disciplinary boundaries.

The aim of this one-day seminar was to explore new ways of thinking by inviting existing design and science collaborators to present their work together, from their own unique perspectives.

Dynamic Duos was curated within the context of the Trash-2-Cash (T2C) project which aims to apply a ‘design-driven’ approach to the development of new, regenerated textile fibres.

The day started with an introduction from Professor Rebecca Earley and Dr Kate Goldsworthy from the Textile Environment Design (TED) research group based at Chelsea College of Arts (UAL) who hosted the event in London. Becky presented a showcase of past and present projects where UAL design researchers from the Textiles Futures Research Centre (TFRC) and at the London College of Fashion have worked with scientists, including the work of Suzanne Lee, Carole Collet and Helen Storey.

Current TED projects such as Trash-2-Cash and Mistra Future Fashion II continue this research direction by bringing together large multi-disciplinary teams to try to tackle the complex problems of materials cirularlity and sustainability. This has allowed TED to build a team of Post-doctoral Researchers – Dr Dawn Ellams and Dr Rosie Hornbuckle, and PhD students who are working in this field. Kate explained, the team’s experiences have resulted in some interesting insights about how designers and scientists can work together, such as ‘bringing our studio with us’, revealing hidden (technical) knowledge through visualisation, ‘bypassing the system’, using co-design workshops, and tacit materials knowledge or ‘design hunches’.

A curiosity about commonalities and differences in the various approaches taken in these projects and partnerships was the driving force behind this event. A fantastic line-up of design and science ‘duos’ were asked to reflect on the following questions in their talks:

As well as some fantastic speakers it was great to have both scientists and designers in the audience, from both academia and industry, representing other EU projects such as Light Touch Matters and ECAP, and UK organisations such as WRAP and the AHRC – a truly informed audience.

The day was organised so that the dynamic duo presentations in the morning generated the content for further round table discussions in the afternoon.

Marjaana Tanttu and Dr Michael Hummel from Aalto University in Helsinki kicked off with a brilliant anecdote about ‘Dog Brushes’. In order to bridge the gap between fibre production and textile prototype they had to solve some very practical problems in an immediate way – separating the fibres using dog brushes and cutting staple fibres using paper scissors. This highlighted a problem that was shared in the room, that often lab-scale equipment is insufficient to produce prototype-ready materials for designers to use in their work. The need to work closely together and share spaces was also a key element in enabling a common language to be developed, and the use of summer schools to create an interdisciplinary ‘playground’ was a theme which resonated in subsequent talks.

Prof Kay Politowicz (UAL) and Dr Hjalmar Granberg’s (RISE) talk began with how they started to work together, as an off-shoot of the Mistra Future Fashion project; they didn’t need to deliver something they simply recognised the mutual desire to make: you make something; I make something, let’s make something together. This highlights a theme that we have been exploring in Trash-2-Cash, that successful collaboration is as much about people getting on with one another, being inspired by each other - ‘clicking’ – as it is to do with systems, tools & methods. Hjalmar drew attention to the ‘demonstrator’ sample as a way of allowing others to see what is possible, while Kay reiterated a point made earlier about how research is intrinsically linked to teaching. Both researchers found that the complimentary skills and knowledge – described as ‘breadth and depth’ (referencing Tim Browns ‘T’ model), as well as identifying a shared problem, provided the basis for working together.

Miriam Ribul (UAL) and Dr Hanna de la Motte’s (RISE) work was presented partially via Skype (a modern enabler of collaboration) and introduced Miriam’s past work for Mistra (where the collaboration was born) and her current Doctoral research. Miriam worked with Hanna as a ‘designer in residence’ which involved intense two week periods in the science lab. Miriam’s approach was playful and experimental: “she created so much cool stuff” Hanna explained; the serendipitous nature of design exploration within such a short space of time compared with the longer process of systematic scientific enquiry was a theme which was echoed by others throughout the day. The hardest thing was working out what they could do together, what was possible, how to start… while Miriam noted that one of the nicest things was being able to get a scientific explanation for what she had made the materials do through her experimentations.

Dr Dawn Ellams (UAL) and Prof Robert Christie (Heriot-Watt University) explained how the challenging landscape of research assessment in the UK was part of the driving force behind creating ‘impact’ through research collaborations with designers. Top-down drivers were also identified later in the day as an opportunity for this type of research, as funders too increasingly understand the value of multidisciplinary research. Bob explained that one of the surprising things about Dawn was how she turned scientific concepts into inspiration for her work, while Dawn noted that she had to communicate her approach to the scientists in a way which gained their trust, learning about a specific part of the process whilst maintaining her unique standpoint as a designer, so as not to become a ‘bad scientist’. Bob repeatedly saw that through uninhibited exploration, his design students were able to make discoveries that scientific enquiry would be unlikely to predict: “I learnt not to discourage them”.

Dr Adam Walker & Nick Ryan (Worn Again) represented an interesting contrast to the academic focus of the first four duos. Working in industry, the pair explained that while the first major challenge had been understanding one another (both explained that they had invested time to better understand the other’s language and discipline), the continuing problem has been communicating the value of a scientific principal to commercial stakeholders. Nick explained that a simple diagram had been the key to potential funders understanding why their technology would make money in a competitive environment, while Adam explained that the real advantage of working in this context was that the market was already established – market-pull is far more effective than technology-push.

Dr Kate Goldsworthy hosted the panel discussion in the afternoon, drawing out some of the key questions from the morning’s talks. Some of the highlights were the ability of designers to ‘ask the right questions’, to challenge the scientists, and the need to work together in close proximity – do we need new spaces for design-science work? Creating an atmosphere for the freedom to explore, and reach serendipitous outcomes which may be more ‘innovative’ than conventional enquiry, how can we do this more in design and science? What can be achieved in science within one month and what can be achieved in design are very different, what can we expect from each discipline given the different timeframes? Investing in the other discipline while maintaining your own disciplinary identity also a featured in the discussion.

Four key questions drawn from the days’ talks were:

This is part of TED’s ongoing research into multi- and inter- disciplinary tools and methods in both the Trash-2-Cash and Mistra Future Fashion II projects.

Watch this space for more events, discussions and research from us in this emerging area.